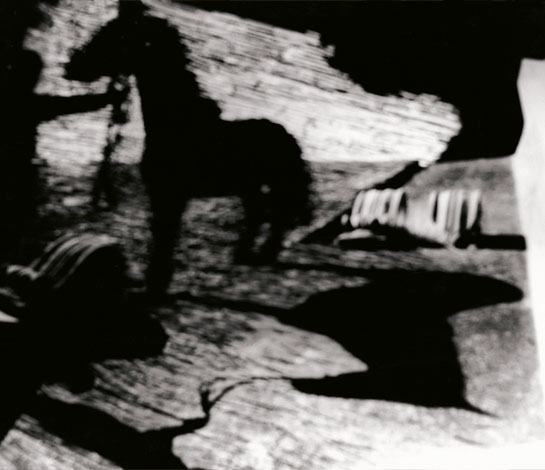 The Tragic Romance Series was included in a group exhibition, Occlusion, A Satellite Exhibition, at The Australian Centre for Photography in Sydney and ‘THAT space’, one of Brisbane’s major artist run spaces during the artist run D-I-Y 80’s. Occlusion was part of a strategy to have the new wave of Brisbane postmodern photography seen and recognised interstate, a strategy driven by a collaborative effort arising primarily from ‘The Observatory’, an artist run collective of emerging Queensland photographers.

The Tragic Romance Series, comprising I Dream Of You At Night, You Hold Me Tight, and You Take My Breath Away, focuses on power and position in relation to female identity and representation. The source of the narrative concept underpinning the series is a painting by the 19th century artist, George Stubbs, of a man holding a horse, an image which is included in the first photograph of the series I Dream Of You At Night. This quotation operates as the lynchpin of the series epitomizing the particular populist genre in early capitalist painting based on the representation of ownership, a role photography has since largely taken over. Within the series, a parallel is drawn between the position of art, the subconscious, and female identity, as objects of possession.  In I Dream Of You At Night the Stubbs image of ownership and possession presides over the scene of a woman suddenly disturbed from her sleep. The shadow of a plane appears to present the possibility of attack. A spatial ambiguity is established between the two dimensional and the implied three dimensional space which occupies the same image. On one level the plane seems to be heading directly towards the startled woman, yet within the three dimensional scene presented the plane is travelling on a different trajectory.

In You Hold Me Tight, the second photograph in the series, the Stubbs-like scenario of horse and owner is played out. The image is blurred and unreal looking as if it is a dreamy continuation of the first scene in the series. This image deals with the mastery of the object of possession and the tenuous yet dependent relationship between the two. While it appears that the agitated horse is held tightly by the ‘handler’ because it may pull away, in the shadow the horse is seen to be relaxed and the reins are slack – indicating that at one level the horse is quite able to pull away and is not held at all tightly.

The Tragic Romance Series, is the first work to employ a filmic narrative tension within a series. The ‘still’, as a static surface of suspense, was a consistent strategy used in other photographic works of this time. This tension between different spaces and forces has been the focus of a continuous investigation throughout both the early photography and later installation works.

Jay Younger
I Dream of You at Night
from
The Tragic Romance Series
1986
Fibre Based Silver Gelatin Print
97.5 cm x 143cm