Big Wig & Charger: A Spectacle of Occupation and Execution 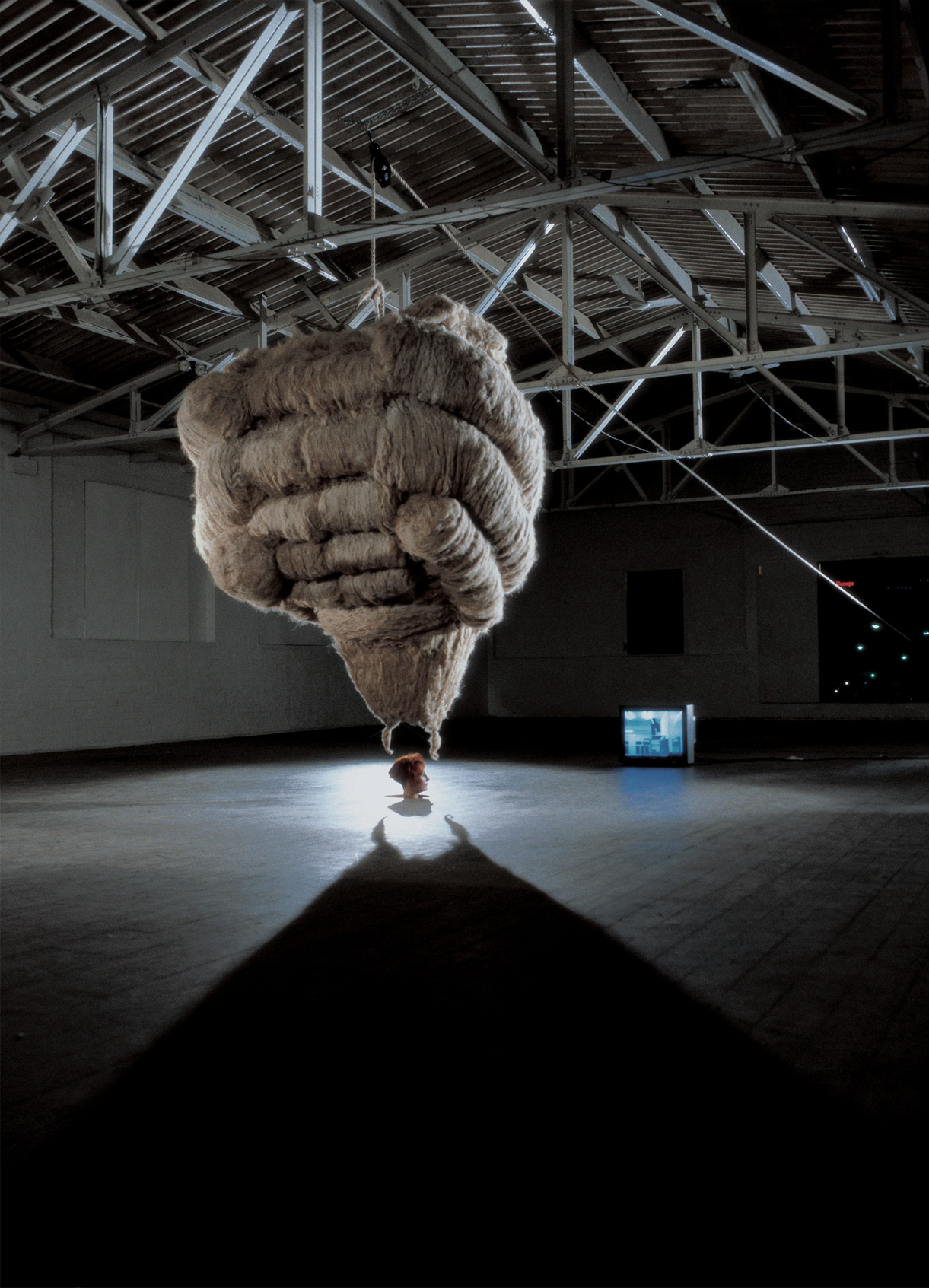 Big Wig & Charger: A Spectacle of Occupation and Execution is concerned with the position and status of women within physical space and the invisible social barriers which contain and deny access to other spaces. The subtitle of this work references a Marxist view of artists’ labour and the gallery context as political territory.

This installation, like Escape from the Empty Disco, investigated a fragmented matrix of spatial relationships and posed a tension or connection between dislocated exterior spaces and the gallery context. Big Wig & Charger: A Spectacle of Occupation and Execution used three sites: the designated gallery space (the top floor), the office space below, and the top floor of a nearby open-air car park. A hole was cut in the gallery floor over which was suspended a large scale Marie Antionette style wig (the ‘big wig’). In the office space directly below, a scaffold was placed beneath the hole. The office space is where the exhibition of art is negotiated and its possibility supported or denied. As rostered participants in the exhibition over thirty women took up the performer’s role by climbing the scaffold in the office and placing their head through the hole into the gallery space above – a playful echo of the guillotine and the rituals of be-heading. In the weeks preceding the exhibition many women artists were interviewed about their ‘place’ and ‘position’ within the arts industry and these interviews formed the soundtrack played during the exhibition. The women artists were both the core internal audience as well as the key participants.

The ‘big wig’ represented an over exaggeration of an outmoded symbol of patriarchal power and foppish aspiration. The promise that the crown would be lowered onto the woman’s head would always remain unfulfilled. Nor was it possible for the woman to squeeze through the hole and raise herself into a position to wear the wig. A sustained tension was created where the woman was held in a confined and perhaps vulnerable position, both captive and captivated, by her aspiration. A video camera was placed in the office space and was linked to a monitor in the upstairs gallery, revealing the woman’s headless body in the space below to both herself and the viewer in the exhibition space upstairs. Her bodily exclusion was evoked and questions regarding the Cartesian mind/body split raised.

The wig was suspended on a rope which cut through the gallery space and out the window, across the vacant lot and was attached to the tow-bar of an orange Valliant Charger, ‘the hot getaway car’, idling stationary on top of the China Town Shopping Mall car park. On the opening night another woman, impatient to leave, paced about the car with a megaphone calling to the woman artist inside the gallery space. A Thelma and Louise road-trip was suspended. The driver was ready and waiting yet the artist inside the gallery was confined by her position and its outmoded promise. A tension was created between leaving and staying. The woman inside was trapped by her fears that if she moved from her position she would lose her ‘place’ in the queue. Ironically movement is denied and she is suspended in the perpetual immobilization of waiting. 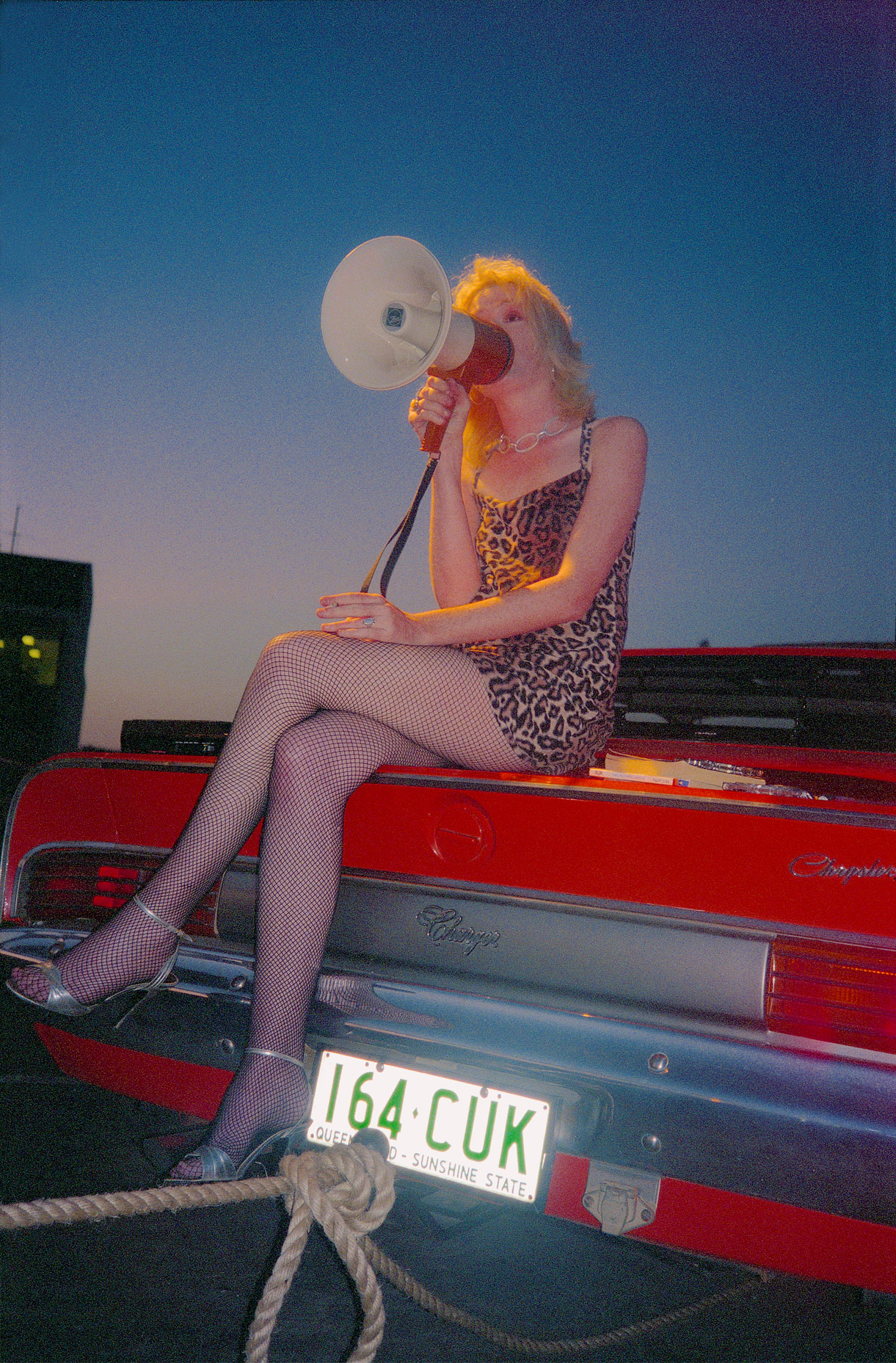 Installation Detail: Kiley Gaffney as ‘Charger-girl’ with megaphone calling to the artist under the ‘Big Wig’ 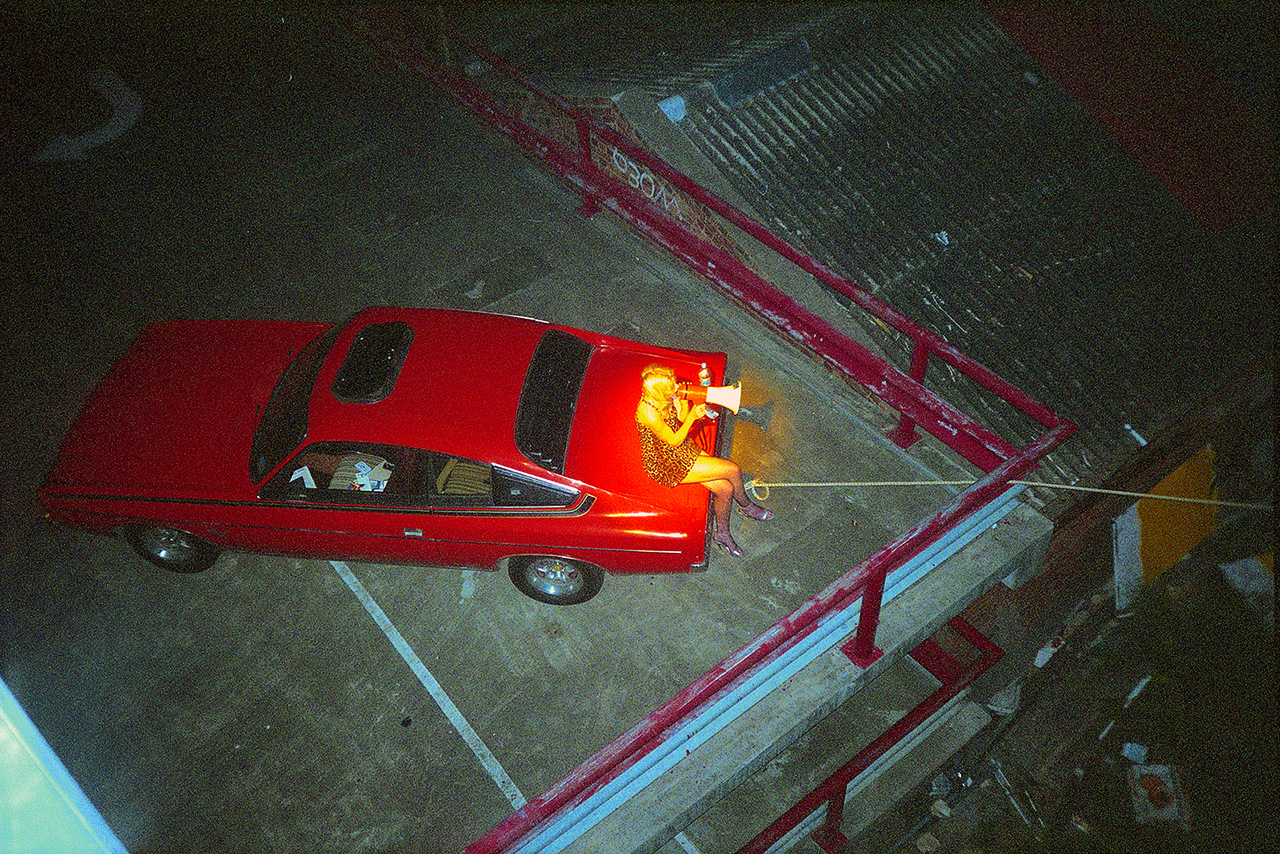 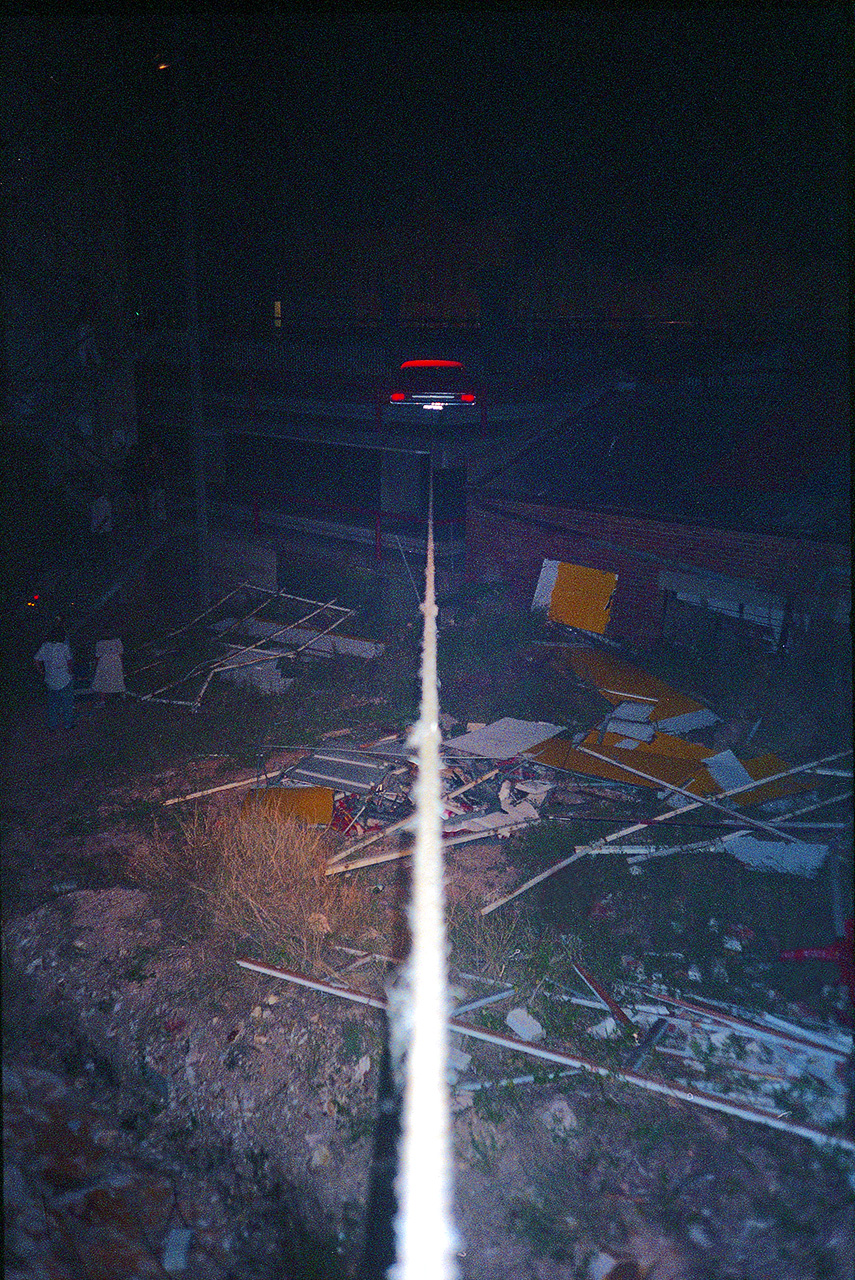 Installation Detail: The rope joining the ‘Big Wig’ to the Charger, cutting across the vacant lot next from the IMA to the rooftop of the Chinatown Mall carpark. 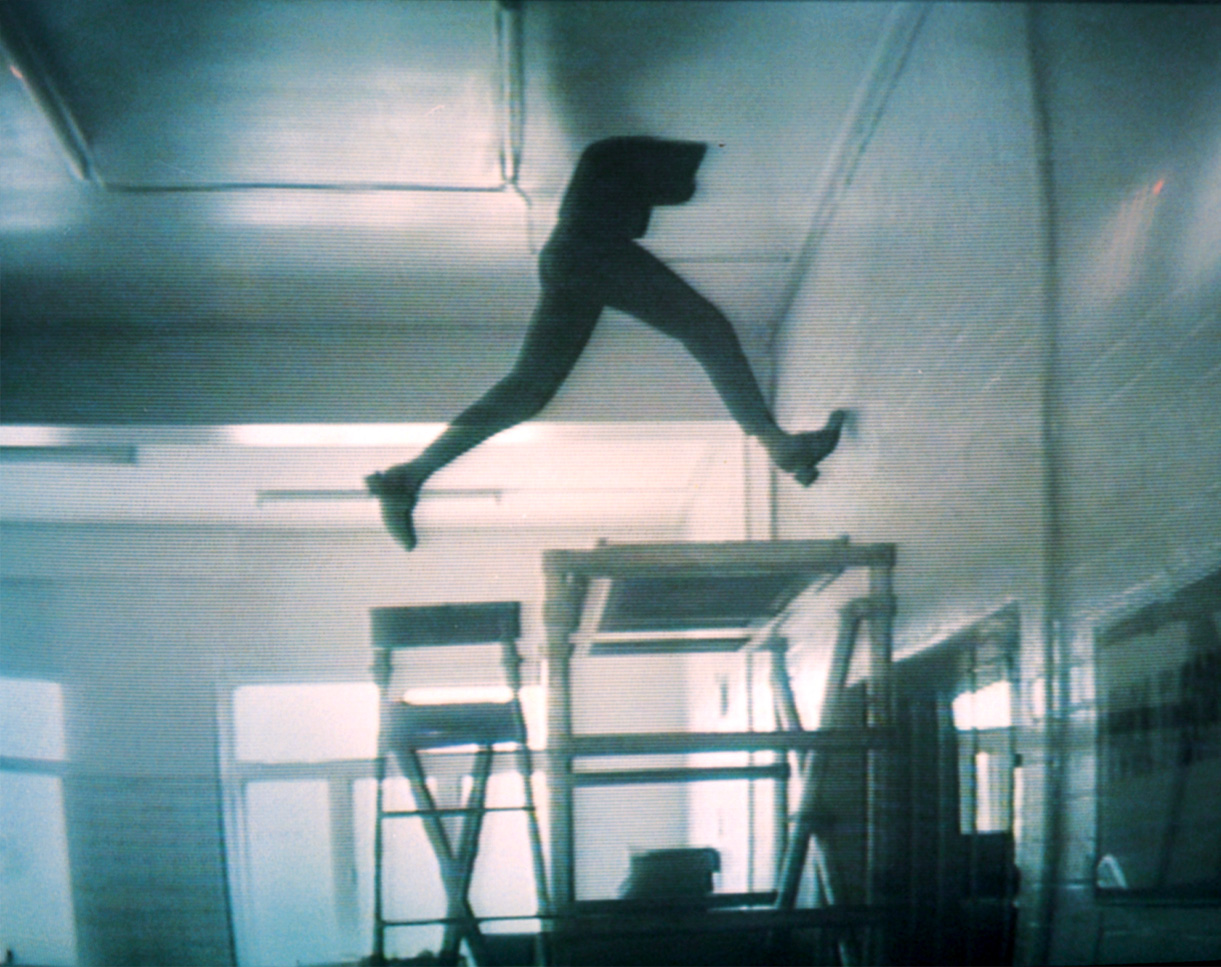 Installation Detail: Video linked image of the woman’s body in the space below on the video monitor on the top floor. Video monitor detail of Katie Doyle.